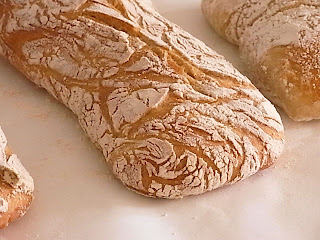 Ronny was going to make some sourdough Ciabatta this weekend, but upon examination of the recipe he was going to use, I saw baking soda in the ingredient list and I was turned off by it. We still wanted to make Ciabatta so I had to quickly find an alternative recipe and I turned to Elra and sure enough, Elra had made some.

The first step is to ascertain if you have the ingredients for making this.
You will need the following ingredients:

Mix all these ingredients for about 5 minutes making sure it's thoroughly mixed, and then mix it for another 5 minutes a little more vigorously this time. Let it sit for 30 minutes inside the bowl and prepare a clean oiled bowl while the dough is sitting.

Then next step is to fold the very wet dough on a heavily floured surface. Please see this video on how to do it. If your dough is very very wet, I suggest using two spatulas to fold it more than a few times until some of the flour is incorporated into the batter, making it more manageable.

Let the dough sit for another 60 minutes inside the oiled bowl, and repeat the above procedure. By now the dough should be more manageable and you can just fold it over horizontally, then vertically, like folding a letter. Return the dough to the oiled bowl.

Let the dough sit for 120 minutes this time. While waiting, clean out the other bowl and oil it. When the 120 minutes is up, fold the dough again and put it into the newly oiled bowl, cover it with plastic and fasten the edges with duct tape. This is to prevent any weird refrigerator smells permeating your dough.

I pretty much followed Elra's recipe even about the part where she left her dough lying in the refrigerator for 18 hours. This is because when you start making the Ciabatta on a Saturday afternoon, it's around 4 p.m. by the time it's ready to go into the refrigerator. Then you resume at around 10 a.m. the next day, if you're lazy like me. I believe the important thing here is to leave it in the refrigerator to mature for at least 9 hours and it shouldn't matter too much if you leave it there for a few more hours. It's probably not a good idea to leave it there for more than 24 hours though.

I don't have a couche, and I just used a heavily floured IKEA tea towel, sprinkled flour on the bread and covered it with cling film. I think covering them with a floured tea towel would have been better as the dough can stick to the cling film if you're not careful, but unfortunately the rest of my tea towels were in the laundry basket at the time. Here is a video by Susan from Wild Yeast on how to cut and transfer the dough to the floured tea towel or couche.

I let it rise for 1 hour and then started preheating the oven at 250C (475F). As soon as the oven reached this temperature, I placed an oven paper on a flat board (or any hard flat item) and carefully transferred the ciabatta dough with the side that was facing down, facing up this time. This is so that you have those nice artistic looking patterns on your bread when they are finished.

Remove the baking hot tray from the oven, and slide the dough onto the hot tray. This is much easier of course if you have a hard flat board underneath the oven paper. Put the tray back into the oven and shut the door.

I'm also going to list Elra's references here and here. When you follow the link, it will lead you to Wild Yeast, and since this bread was very photogenic, I've decided to make an entry to Yeast Spotting. 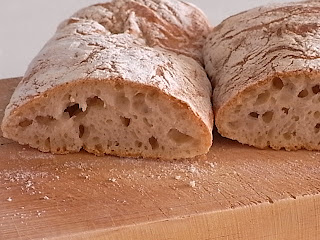 Posted by Murasaki Shikibu at 11:47 AM

Your ciabatta turned out perfect! I should follow your example and make some, I love this bread so much I would probably eat it all by myself!
Glad you like the cauliflower with tarator. It is my favorite and I have been know to inhale the entire cauliflower!

Wow, it's perfect! Love to see all the holes in breads.

it is a very photogenic bread. Looks like it has a good crumb!

That bread is so very handsome. I love the way it looks and I love the beautiful patterns on it! Want to smell some fresh baked bread now.

I love this loaf and wanted to mention one I made recently called floating loaf where the dough is dunked in water. It came out very well and was so easy to make, no kneading at all.