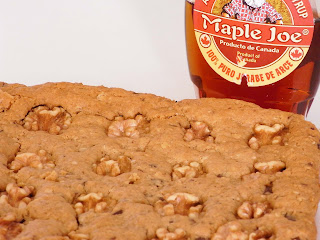 I've been wanting to do a variation of one of Trish's very tempting cookie bars for sometime, but didn't get around to it until now because I had trouble finding very basic ingredients like graham crackers or some other item that was pretty integral to the recipe. Check-out what Trish has done with her Peanutty Oatmeal and Pecan Cookie Bar which was adapted from a recipe from My Baking Addiction.

I really liked Trish's idea of making cookie bars out of this cookie recipe and though her modifications were good just as they were, I made further modifications due to the unavailability of certain ingredients. I used maple syrup instead of molasses and chopped up pieces of dark French chocolate instead of using peanut butter chips. Note that I only used 100g of dark chocolate, whereas the original recipe calls for 1 cup.

I didn't reduce the amount of chocolate because I was trying to be healthy here, but thought that 1 cup was too much - and believe me the bars were sweet enough with only 100g of dark chocolate in it. As for the other ingredient substitutes versus the original recipe, let me say that the cookie bars were most likely enhanced by the use of 100% brown sugar and whole wheat flour. I'm pretty skeptical about brown sugar and whole wheat flour being that much healthier anyway so if I thought AP flour and refined white sugar would have made it taste better - believe me - I would have used the latter.

I 'heart' Trish for her adaptation of this recipe. It was just one of those moments in life where someone had a moment of 'genuis' and managed to make something that was already good even better.

Step 3: Stir in the egg, vanilla extract and maple syrup with a wooden spoon. Add the peanut butter. The batter will be quite firm so a flimsy beater won't really do the job.

Step 4: In a separate bowl, sift the flour, baking soda and salt and mix this into the batter.

Step 5: Stir in the oatmeal and pieces of dark chocolate.

Step 6: Line a baking tray (23 cm x 23 cm) with baking paper and pat the dough into the tray so that it's evenly distributed and evenly place 5 x 5 walnuts. Press them in firmly.


*Any dark chocolate you like will do. I don't like Spanish chocolate at all so I try to buy chocolate that's made in France.

**The baking time may differ depending on your oven. Estimated baking time can range anywhere from 20 - 28 minutes.
Posted by Murasaki Shikibu at 11:30 AM 13 comments: 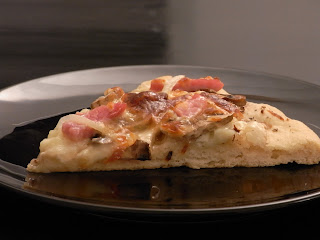 Since I'm slacking off, I'm going to keep it simple. This isn't really a recipe, but just a winning combination of toppings for a pizza!

I first brushed the pizza dough with extra virgin olive oil and sprinkled some coarse sea salt sparsely over it, after which I made a nice layer of Brie cheese. Then I put sliced button mushrooms over this, followed by pieces of ham and thinly sliced onions. I topped this off with some mozzarella cheese.

That's it - and Ronny loved it. I'd say this is definitely 'guy' food...unless your guy has issues with Brie cheese or mushrooms.
Posted by Murasaki Shikibu at 10:00 AM 5 comments: 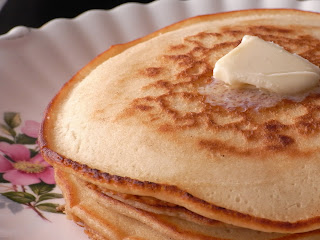 I've been seriously slacking off on writing posts in my blog and I'm going to blame the hot weather as well as the fact that I'm in the middle of renewing my residency permit right now. I guess I've just been too worn out from the heat and stressed out to be inspired to cook.

Here's a very simple pancake recipe. It's based on a recipe for old fashioned pancakes which was scribbled on a cooking card belonging to Dakota Kelly's grandmother, and I've modified it a bit and used yogurt in it.

Step 1: Sift the dry ingredients into a bowl and make a well in the center. Add the rest of the ingredients and mix well.

Step 2: Use a ladle to make the pancakes on a hot griddle.

Note: If the batter seems dry add milk or yogurt to desired consistency.
Posted by Murasaki Shikibu at 2:56 PM 13 comments: