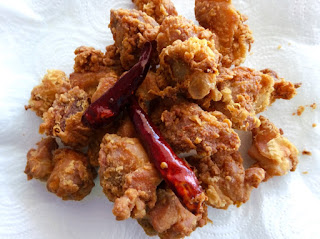 This is from Marion's Kitchen.   I didn't make the fried shallots or sauce, but fried some red chilies in the oil with the chicken for some flavor.

This was very flavorful and interesting.  Rice flour also results in a much crunchier crispier crust than wheat flour and  it's even gluten-free if your children have celiac's disease.

*Sunflower Oil for Deep Frying, or any oil of your choice

Step 1:  Make the marinade by placing the garlic and coriander roots in a food processor.

Step 2:  Transfer this into a bowl with the soy sauce, oyster sauce, sugar, pepper, ground cumin seeds, turmeric and salt.  Mix.
Note:  You can also put everything into the food processor but I didn't want to put certain ingredients in there.

Step 3:  Cut the chicken thigh into bite sized pieces and put it into the bowl with the marinade and mix well.  Marinate for 2 hours in the refrigerator.

Step 4:  Dust the chicken in rice flour, shaking off the excess.

Step 5:  Fill a saucepan to about 1/3 capacity with sunflower oil (or any other oil you use for frying) and heat it up over high heat. Dip a wooden spoon or chopsticks in to see if tiny bubble form.  This is how you know when it's ready.

Step 6:  You can put all the chicken into the oil and cook them until they float to the surface and a little brown but not done yet.

Step 7:  Remove these onto a plate with paper and wash the remaining dishes.

Step 8:  Heat-up the oil again and fry the chicken for a second time.  You can add the dried red chilies at this point.  The chicken is ready when they are golden brown.

Marion serves her chicken with crispy fried shallots and a sweet chili sauce topped with coriander, but I had mine plain.

The chicken was very crisp and juicy.  Loved it. 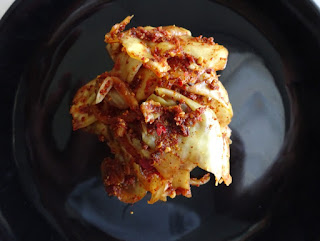 This recipe was given to me by my friend Chi.  Chi is a great cook among other things and she was nice enough to share this with some of us.   This is basically a summer time Kimchi and isn't fermented for such a long time.  During a hot summer 12 - 24 hours is enough, depending on how hot it is in your house. 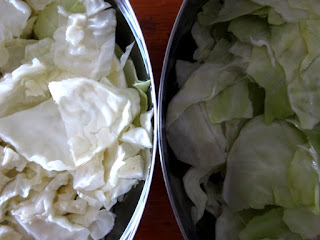 Step 3:  After 2 hours, drain the cabbage and rinse them once or if you're using Spanish sea salt (gruesa), just drain it.


Step 4:  Put the cabbage into a big bowl with the sliced onions, scallions garlic, sugar, brined shrimp, the fish sauce and chili flakes.

Step 5:  Wear gloves to protect your hands and mix the ingredients so that the chili and everything else is spread evenly.  Massage the ingredients gently while doing so.

Step 6:  When everything is mixed quite well and quite wet, put this into your airtight container and pour in 1/2 Cup water. 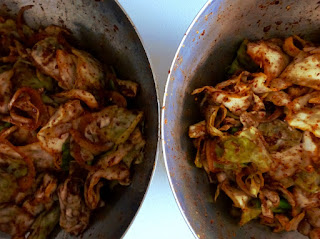 Let it ferment at room temperature in the summer for roughly 24 hours. 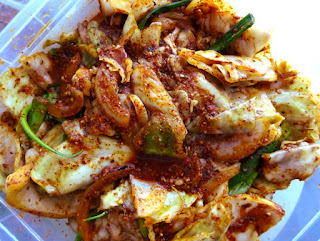 Taste it at this point to see if it's ready.  If it is store it in the refrigerator.  If not, leave it out for a few more hours, testing it every 2 hours or so. 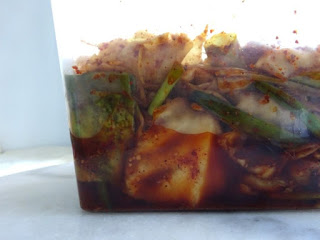 When it's ready it will look something like this, but please taste it to make sure!


Posted by Murasaki Shikibu at 6:27 PM No comments: 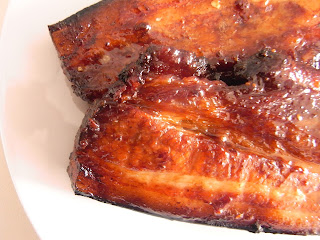 I've always wanted to try making my own Char Siu but never had.  this time I finally did it!

The first thing you need to do is marinate it.  I marinated mine for 36 hours. 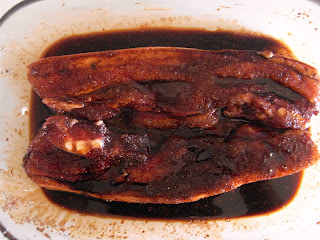 At this stage, it doesn't look very attractive at all.  Not only that, when my Taiwanese friend saw a photograph of this on her smartphone, she asked me if it was Dong-Po Pork.

I let this marinate in my refrigerator, turning the pork sometimes.

I got the recipe from Rasa Malaysia.  I purchased all the ingredients first.

Step 1:  Just rub in and mix all the ingredients with the pork in a casserole dish and then put plastic over it.

Step 2:  Store the above in the refrigerator, taking it out and turning the pork sometimes.  Keep doing this for 24 - 36 hours.

Step 3:  Line the oven tray very carefully with aluminum foil and put it in the bottom rack.

Step 6:  After 15 minutes, turn the pork and baste it with the marinating liquid and roast for another 20- 25 minutes.  Keep an eye on your pork toward the end to make sure it doesn't burn.

Step 7:  Take out the char siu and let it rest on a plate for awhile, then slice it.  Serve on steaming hot rice.  Enjoy! 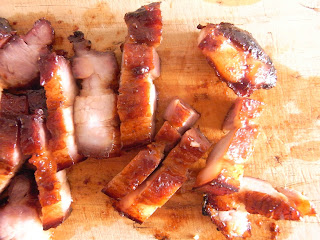 Posted by Murasaki Shikibu at 3:56 PM No comments: 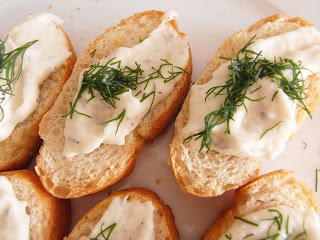 Brandade de Morue or Cod Cream is something I had never made before.  The Spanish and salted cod go back a long time and they still sell these everywhere.  If you're interested in this, I recommend Mark Kurlansky's "Cod" or "Salt - A World History".

However, instead of  making Bacalao a la Crema, I opted for Brandade de Morue, the French version of this.  They are quite similar, but the French version seemed more flavorful.  I also balked at using salted cod as there were warnings galore that my refrigerator would smell fishy.  I bought frozen Bacalao instead.

Anyhow, I started out by defrosting my Bacalao which were left in the refrigerator overnight. The next morning, I started cooking. 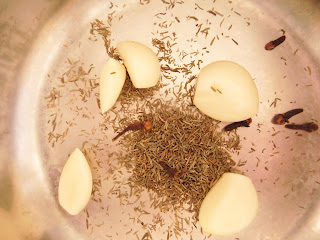 Then you add 1 cup cream and simmer it without letting it really boil for 6 - 8 minutes. 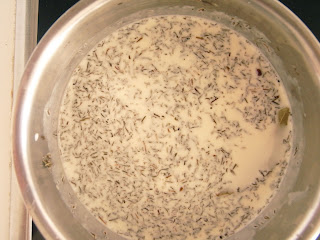 In the mean time, you boil the potatoes until they are soft enough to mash.  I peeled mine, but you can also cook them in their skins and peel them later. 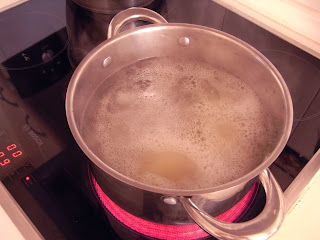 You can prepare everything else while the potatoes are boiling.   You simmer the cod, never letting the water come to a boil because this will render them useless for this execution.  Maybe 1 - 2 minutes. Remove the cod from the water and carefully remove the skin and any bones and put it into the cream mixture. 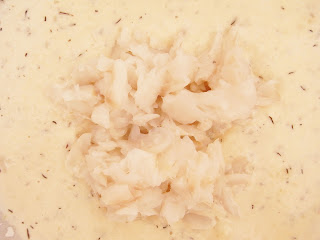 Then you use a hand blender and puree it and it's ready to serve!

I served mine of thinly sliced baguette, laced with garlic oil and toasted in the oven, and garnished them with sprigs of dill! 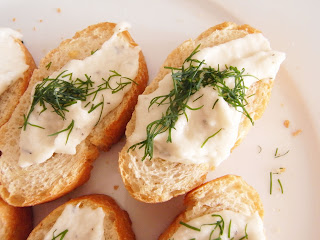 They're nothing earthshaking, but good nonetheless.  Enjoy!

Step 4:  Cover the cod in water and simmer gently.  Do not let it boil!  You will see bubbles rising gently. Do this for 1 - 2 minutes.

Step 5:  Remove the cod from the water.

Step 6:  Remove the skin and bones from the cod and add this to the cream mixture you made earlier.

Step 7:  Use a hand blender and make a puree!

Step 8:  Let it cool down a bit and then serve on garlic bread and garnish with dill and maybe boiled prawns. 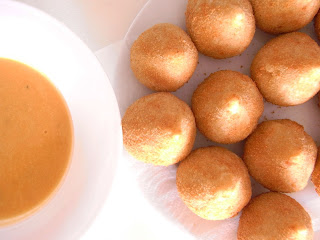 Everywhere you look, you see butternut squash now.  It is in season and sweeter than when it is off season.  I bought one, choosing a heavy hard one, asking them to quarter it for me.  My grandmother instructed me to choose squash in this way.  It turned out to be pleasantly sweet.

The coxinha is another story.  I bought chicken carcasses that they sell for making broth, made a few liters of broth, and then picked off the meat from all the nooks and crannies, and made coxinha.  The original recipe is here, but I have made some modifications.

Step 1:  Simmer all the ingredients for the broth for 1.5 hours.

Step 2:  Transfer the carcasses into a large bowl.

Step 3:  Strain the broth to remove everything else.

While the broth is simmering you can prepare everything else.

Toast the cumin and set aside. Then do the same with the coriander seeds, then chili.  Then put these through a mill so that it is in powder format.

Step 1:  Peel and cut the butternut squash into chunks. This does not require precision.

Step 2:  Peel the potato and quarter it.

Step 3:  Chop the parsley, onion, celery and garlic and set aside.

Step 3:  Sautee the parsley, onion, celery and garlic until fragrant in the olive oil.

Step 4:  Add the chunks of butternut squash and potato and toss it around until it is all coated in olive oil.

Step 5:  Add the toasted cumin, coriander and red chili that you have milled into a powder.

Step 6:  Add the broth to cover it as well as 2-3 laurel leaves, and bring to a boil.  Lower the heat and let it simmer for 30 minutes or so until the potato is soft enough to puree.  Salt, pepper to taste.  Remove the laurel leaves before pureeing it.  Add cream and stir a bit.

Unless you're crazy I would wait until the next day to make the coxinha.  This is where you'll be using the chicken you have removed from the carcasses.  I had just enough to make coxinha based on the Tabieats recipe.

My slightly modified recipe is as follows:

A bowl full of chicken meat

A Bunch of Coriander Leaves


Step 1:   Make the dough first.  Bring the chicken broth to a boil and then turn off heat.  Add the flour and stir until it all comes together.  Set this aside.

Step 2:  Sautee the garlic and onion in the frying pan with a little bit of olive oil and then add the chicken and sautee some more.   Add seeded and chopped jalapeño pepper.  Salt & pepper to taste.

Step 4:  Whisk the eggs in a bowl, and have bread crumbs ready on a plate.

Step 5:  Now take golf ball sized pieces of dough, flattening it and wrap the chicken mixture into them.  They should be cone shaped.

Step 6:  Dip the coxinha into the eggs and then coat them with bread crumbs.

Step 7:  Repeat the above until there is no more filling.

Step 8:  Deep fry the coxinha until they are golden brown and they're ready to go!

Now enjoy a spicy warm sweet bowl of butternut squash soup with your coxinha.  It was a lot of work but you're glad you labored and toiled in the kitchen for hours now!


Posted by Murasaki Shikibu at 6:08 PM No comments: