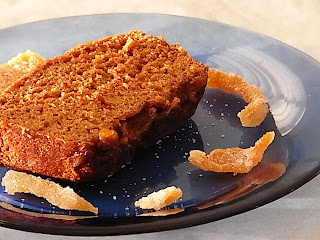 I found this recipe on Elra's Baking. Elra, unlike me, is a masterful baker. You can see real skill in her creations. Usually her recipes are somewhat complicated, time consuming and/or take real skill, but this time she had something pretty easy to share with us mere mortals, so I decided to try making it. If you're interested in reading up a bit more on this kind of bread you might visit David Lebovitz's page here. It may not be the most informative article about this kind of bread, but I like his story telling skills. He can make just about anything sound interesting and relevant to you.

Unlike Elra's gluten free version, I used regular AP flour and whole wheat flour. I bought 6 oranges and spent yesterday afternoon slaving in the kitchen, making candied orange peels. I'd have to say this was the hardest part of this recipe. However, as I have learned, home made candied orange peel or lemon peel is just so much nicer so I went the extra mile. Not only that. In Spain where I live, the cost of 6 oranges is under 2 euros and 1 kg of sugar is something like 0.70 euros. Basically, if you choose to slave in the kitchen instead of taking the easier way out you get about 2 cups of beautiful candied orange peel bursting with flavor for under 3 euros. In the spice bread, I used raw brown sugar instead of 'molasses + brown sugar' as I couldn't find any of the former, and I omitted the orange flower water as I felt it was an artificial flavoring this mix didn't really need. 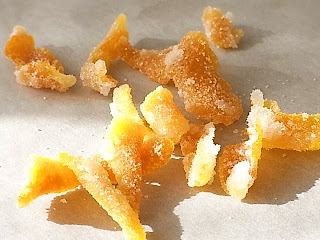 Since Elra noted that you needed to let the bread sit overnight or if you can manage to restrain yourself, for 3 days, I made the loaf late last night so that I could have a slice this morning.

Perhaps because I didn't chop the orange peel finely enough, they appeared to sink to the bottom of the batter and created gaps at the bottom of the loaf, but this didn't detract from the wholesome spicy aroma of the bread. When I bit into the loaf, the burst of the spices and freshly made candied orange peels made all the slaving worth it. I still have more than 1/2 cup home made orange peel left so I'm definitely going to make this again.

*I used a thick dark honey from Galicia. I suggest using orange flower honey to enhance flavor, if you can get this in your area.

Step 1: Warm the milk, honey and brown sugar over low heat until everything has dissolved. Set it aside to cool

Step 3: Mix all the dry ingredients except for the orange peel. Put everything in a big bowl and use a beater to beat it all up if you are lazy about sifting ingredients.

Step 4: Mix the wet ingredients into the dry ingredients. Mix it just so that you don't have any clumps of flour in the batter.

Step 5: Stir in the chopped orange peel and pour into a buttered, paper lined baking mold.

Step 7: Leave in the mold for 10 minutes then remove from the mold and let it cool to room temperature.

Step 8: Wrap it with the paper still on in aluminum foil and let it mature overnight or for 3 days.

Step 9: Make yourself some coffee or tea and enjoy!

Note: Speaking of candied orange peel this guy has really made beautiful ones.
Posted by Murasaki Shikibu at 9:51 AM 4 comments: 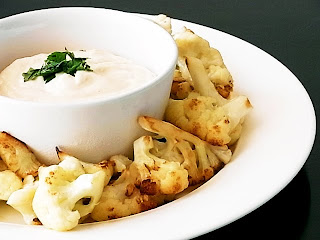 What do you think of when you hear this word?

When I hear this word, my mouth waters ever since I found Taste of Beirut. I never realized how much I loved Lebanese food until I found this blog. Everything I've tried has been divine.

As I've mentioned before, I'm not a big vegetable lover and I'm always looking for new recipes that will make me say: Ooooh I love this and I want to eat more! This is such a recipe. Need I say more?

I have listed the ingredients and given you a quick version of how to make it, but please go here for further details. I also recommend you visit Taste of Beirut, because there are so many other mouth watering recipes to be discovered there. One of my absolute favorites is the Shrimp in Cilantro & Garlic Sauce.

Step 1: Cut the cauliflower into florets and then braise them in olive oil until golden brown, lightly salting them as you braise them. Leave them to cool to room temperature.

Step 2: Put the lemon juice, water, garlic and Tahineh into a food processor and blend until it's a nice soft cream the consistency of mayonnaise. Salt to taste.

Step 3: Serve the cauliflower with the sauce. Dip and eat.
Posted by Murasaki Shikibu at 2:43 PM 7 comments: 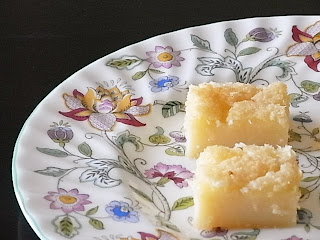 I still remember with fondness those days when I had just been married in my mid-twenties, and my sister was Director of Japanese Programs at the Sheraton Waikiki. If I close my eyes I can almost see the sunlit Surf Room of the Moana Surfrider with their lovely lunch buffet of a myriad delights, and I can almost hear the low din of happy people on holiday, with waiters and waitresses weaving through the tables neatly covered in pink and white cloths, with their pitchers full of iced tea with pineapple juice, the ice cubes lazily clunking around inside them.

The Waikiki area is a perfect beach resort, almost like a chapter in Disneyland. It's very rarely that you see things tourists don't want to see. Everything is clean and well-ordered and panders to the perfect holiday on a tropical island without some of the more unpleasant 'reality' of the tropics. You don't really notice the presence of mosquitoes or fungus growing in all manners of places, and you don't see the telltale signs of bad maintenance like chipped tiles and broken fences that you often see in many tropical areas.

The other day I was looking for a recipe with glutinous rice. This was because I had purchased some to make Puto, a Filipino steamed rice cake, and then after finding out that the recipe didn't really produce the results I wanted, I decided to look for other ways to get rid of the rest of the glutinous rice flour. This was when I came across the word 'Butter Mochi'. Someone mentioned it in the comments of a blog explaining how to make Mochi, saying that it tasted nothing like Butter Mochi and that she was terribly disappointed.

I kept the recipe lying around for days unconvinced whether I should try making it, until finally I thought: What the hell. I might as well make it, because this bastardized version of Mochi is kind of like a Japanese American and kind of like me. Although some sources speculate that Butter Mochi is a bastardized Bibingka (another Filipino rice cake) meets Portugal, I don't think it's anything like Bibingka. Whatever Butter Mochi is, I feel it's more like an accurate representation of the Hawaiian brand of East meets West. I mean if a lot of the immigrants had glutinous rice flours lying around their homes, wouldn't someone there have just come-up with this one day when they suddenly needed to bake a cake for some guests, but didn't have any ordinary wheat flour lying around? Let's just throw in the rice flour and lots of eggs and butter because rice flour isn't going to get fluffy!

So here it is. The original recipe is from here, but these are the proportions for a smaller baking pan.

23 cm x 23 cm Baking Pan <---Turned out to be too small. *I used my home made vanilla essence made with vodka and vanilla beans. I followed this recipe.

Step 2: Mix all the dry ingredients in a big bowl with a beater so that it's well-mixed.

Step 3: Beat the eggs in a smaller bowl. Add the milk and vanilla essence.

Step 5: Pour in the melted butter and dessicated coconuts.

Step 6: Pour the batter into a buttered baking pan and bake in the oven for 1 hour.

Step 7: Remove from oven after 60 minutes or when the top of the Butter Mochi is golden brown, and cool completely before cutting into squares and serving.

While this was baking, my apartment was filled with the sweet aroma of sugary coconuts and vanilla. I'd say it's a happy smell. The best part about the Butter Mochi is contrast of the crispy coconut crust on top and the chewy layer of Mochi beneath it. I think when I make this again, I'm going to use a much larger baking pan so that there's more crispy coconut.

Notes: Around 35 minutes into baking this, I walked over to the oven and took a peek to see how things were coming along. It turns out the baking pan was too small and the Butter Mochi had puffed up like Yorkshire Pudding or Dutch Babies. Lesson learned. Please use a larger baking pan than 23 cm x 23 cm. I'll give this another go and post the ideal size.
Posted by Murasaki Shikibu at 2:49 PM 11 comments: