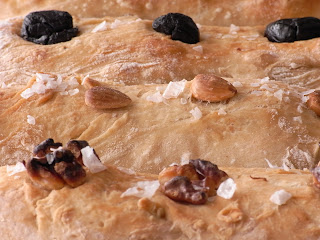 If you've already tried making Jim Lahey's No Knead Baguette, and know how the dough should look during the different stages, you can easily make it with wild yeast.

If you keep your 'starter' in the refrigerator, chances are you take it out once a week and throw away half of it, and feed it 1/2 cup flour and 1/2 cup luke warm water.

Why not make Jim Lahey's No Knead Baguettes with that half you throw out?

This is what you need to do:

Step 1: Put the starter that you would normally throw away into a plastic or glass bowl during the day and feed it 1/2 cup flour and 1/2 cup lukewarm water. Cover it with a towel and let it get bubbly.

Step 2: Before you go to bed, add flour, sugar, salt and water just like in the recipe. The amount of flour and water you need will depend on the wetness of your starter and the absorbency of the flour. Add 1/2 cup at a time and try to achieve the same consistency you achieved before when you followed the recipe with measured ingredients. You should use the exact amounts stipulated in the recipe for sugar and salt. Basically, you want to add enough flour and water until you have got the same consistency as you did when you made it with the commercial yeast and followed it to a tee. Don't be too concerned about small details though of how many grams of flour you have got in there, because I have tried making it this a few times and the baguettes always seemed to turn out right.

Step 3: Leave it out overnight like the recipe says and in the morning you'll notice that the dough has bubbled up so that there is a flat plane of dough inside your bowl. Flour your counter very generously and fold it 3 times with a spatula (I use 2 spatulas) and put it into a lightly oiled (I use extra virgin olive oil) bowl. Brush the top with extra virgin olive oil and sprinkle good quality salt over it. Cover it with a towel and leave it for 1-2 hours like the recipe says.

Step 4: Divide the dough up into 4, stretch it out just like the recipe says and embed them with goodies (cocktail tomatoes, garlic cloves, walnuts, Marcona almonds, olives, etc), brush them with more extra virgin olive oil, and sprinkle them with Fleur de Sel.

Step 5: Bake them in a preheated oven at 500F (260C) or however high your oven will go. My oven's maximum temperature is 250C and they turn out fine. I baked mine for 20-25 minutes. Baking time will depend on your flour quality and oven, so watch them and bake them until they are at least a bit brown.

*This is my second entry to Yeast Spotting.
Posted by Murasaki Shikibu at 1:04 PM

Beautiful!
I don't like to waste either.
For the BBA starter I have just been using a cup, build up a cup. No toss off if I can remember to bake at least every 3 days.
I haven't tried Lahey's book yet. Can't wait!

Sounds delish! I'll have to try this soon!

I haven't tried making bread at all... It looks awesome. Happy Weekend to you!

Lovely bread Murasaki. I think I will never go back to commercial yeast since I develop my own wild yeast .

That's a gorgeous loaf, and now you'll have to tell me what wild yeast is? This loaf does look good!!

I will make this baguette one day now that you have taunted me twice!

I have done lahey's regular no knead. I haven't done the baguette. will need to try this out.

So funny- I have this recipe on my desk to make. Saw it recreated on one of the blogs and it looked so good. Hey Murasaki- great minds think alike.

I just love your bread recipes and posts, it's so nice seeing an update, but maybe my RSS feeds are not working?

How are you? Were you able to get my card?

This sounds amazing! I have not baked a lot of bread lately...

I love the close-up of your "goodies" on the beautiful crust!

I don't do toss off for my starter, I just feed it and use it. If it starts to seem weaker than it could be, I do a couple of toss off type recipes (muffins, coffee cake) until I have just a little starter and then I build it back up. I know this isn't the accepted method, but my starter has a really wonderful complex flavor from a couple of years fermentation.

I tried a Lahey recipe a friend had posted on his blog awhile back. The recipe used so little yeast, I was able to substitute a mere 1/4 cup starter and I got great results. I guess the yeast really get a chance to feed on the ingredients and multiply during the long rise. It sure made terric bread!

I'll need to get a look at that book, your baguettes look wonderful!!

You know what they say, waste not want not! This bread looks great.

i finally got a copy of Lahey's book. now I need to give it a try.

Oh I love it! Thanks for the shoutout. I should get back to making breads soon before it gets too hot here.